Takeout ONLY Wednesday through Sunday with pickups starting at 4PM until 7:30PM

After starting stand-up comedy over a decade ago at an open mic in Halifax, Nova Scotia, Kyle Hickey has blossomed into a talented writer, actor and comedian, making appearances at the Boston Comedy Festival, CBC's Ha!ifax Comedy Festival and JFL42 in Toronto, as well as acting roles on both YTV and MTV. His two live comedy albums, Experimental Phase and The Fresh Prince of Donair can be heard in rotation on channel 168 Canada Laughs on SiriusXM Radio as well as being found on iTunes and Spotify.

Since entering the Yuk Yuks Search for Canada's Funniest New Comic years ago, Laverty has been nominated 4 times for a Canadian Comedy Award. December, 2014 Shannon was named as a top host of the year in Now Magazine by comedy critic Glenn Sumi. She has traveled from Vancouver to St. John's. Shannon toured Johannesburg, Durban and Cape Town, South Africa. Some of her favourite shows have been at community fundraisers and Military posts. She has performed at a NATO base in Germany and hopes one day to travel the world performing for all of the military personnel. Shannon's recent TV and radio credits include: Laugh Out Loud (CBC Radio), Winnipeg Comedy Festival (CBC), Listed (MuchMoreMusic), Club 54, "Fruitopia Comedy Funfest" at Paramount Canada's Wonderland (broadcast on CKVR-TV), The Movie Network's Pay-Per-View comedy special "Mondo Taboo 2", She's So Funny and Funny Girls on the Woman's Television Network, Comics (On CBC-appeared in 2 B roles) and Yuk Yuk's - The Radio Show on the Telemedia Network. Shannon has also made appearances at other comedy festivals. YYC Calgary comedy festival, Sudbury LOL comedy Festival, Niagara Falls comedy Festival and the Molson Canadian Toronto Comedy Festival. Laverty's on stage persona is proud to be provocative. Her come-hither attitude will draw you in and her flirtatious delivery has been embraced by all sexes. 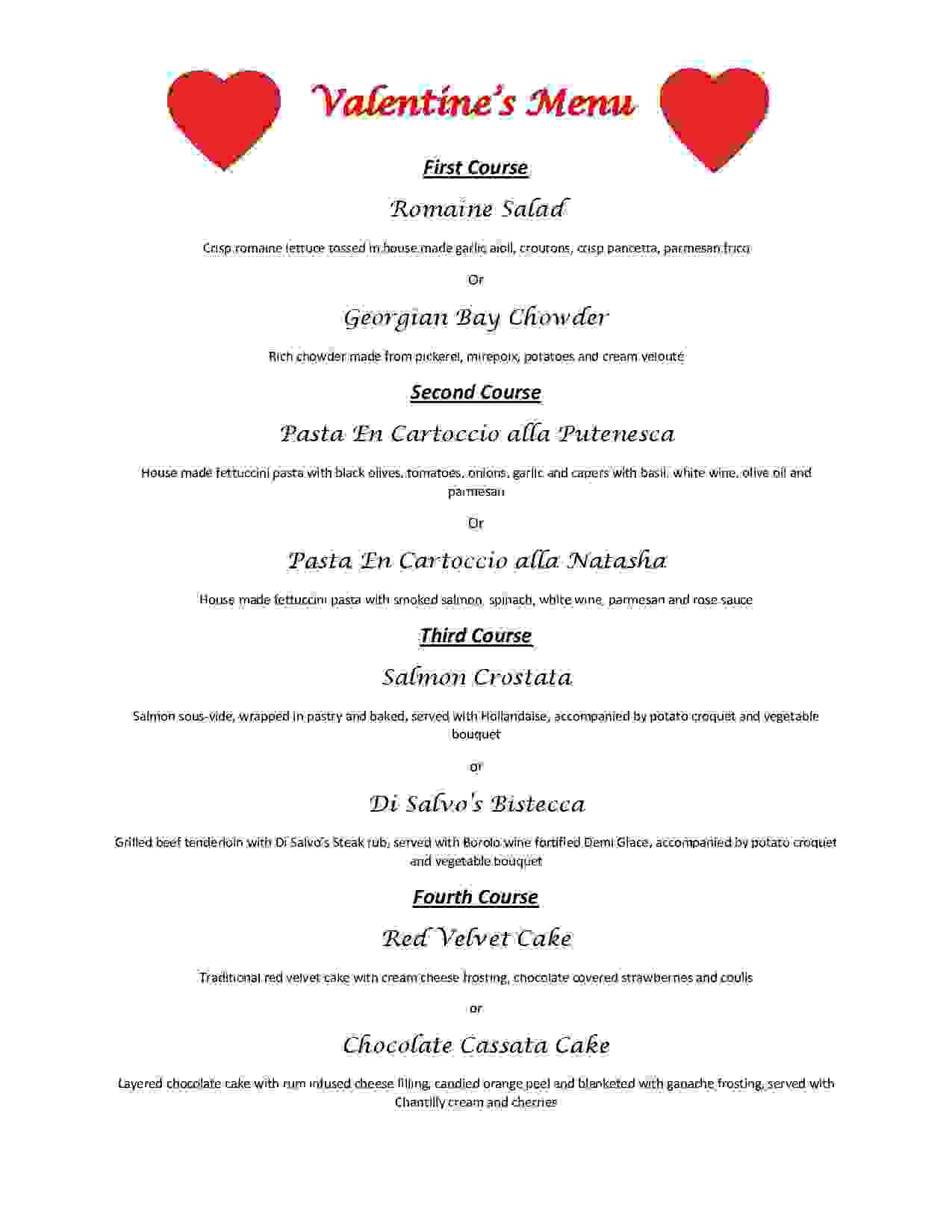 Eat with your heart this Valentine's Day!  Di Salvo's Bella Cucina is the perfect place to celebrate the day of love. We've planned a very special evening featuring a 4 course dinner, including a romantic lovers pasta course served En Cartoccio style (Swan shaped presentation).  You may choose to include some of our fine Italian wine to accompany your meal and we're certain you'll enjoy the sound of romantic love songs played live on piano by Damien Laframboise.

The price for this special 4 course dinner is $70 per person.  Limited seating is available.  Reservations are on a first come first served basis and confirmation must be secured with a credit card.  Cancellations can be made with a minimum of 48 hour notice, otherwise the full amount will be billed to your credit card.